A little over week ago, a white Subaru got washed off the Moa Point breakwater by a ‘rogue’ wave. Some reports said the car’s occupants were fishing “at the popular fishing spot”, whilst eye (and social media) witnesses said that 3 people were actually inside the car when the wave struck them. They had to smash their way out through the windows and were lucky to get out of the wild ocean alive.

This is not the first time a car was swept off that breakwater, and people have died there in the past, according to locals. An airport spokeswoman wrongly claimed that the metal safety barrier had “recently been damaged by the storm or vandalised”. Now, that ‘barrier’ has long been broken, and the breakwater safety sorely neglected by the airport. As with the entire southern end of the runway, the breakwater is an eyesore full of dangerous rocks, akmons and crevices and open to the pounding southerly waves. We can often watch giant waves break over the entire runway end and the breakwater, with holes spurting water several metres high.

We also often watch people fishing off the breakwater, including taking their vehicles up there. Most fishermen aren’t foolhardy enough to do so in southerly swells but rubberneckers have frequently be seen running away or getting drenched in waves breaking over the runway and breakwater. It is an extremely dangerous area.

However, when it comes to finding the authority responsible for ensuring public safety, the plot thickens considerably. In a series of tweets between Dr Sea Rotmann, our Co-Chair and a Moa Point local, the @lyallbaynz account, Eastern Ward Councillor Chris Calvi-Freeman and Greater Wellington Regional Council (GWRC), we tried to uncover who ultimately was in charge – both, of removing the drowned vehicle which was visibly polluting Lyall Bay with debris (and most likely also toxic fluids like oil, petrol and air conditioning fluids etc.), and for taking responsibility for granting unsafe access to the area.

Greater Wellington was the only Council who responded to our inquiries (except for City Councillor Calvi-Freeman) and finally sent commercial divers to the scene to recover the vehicle (4 days later). 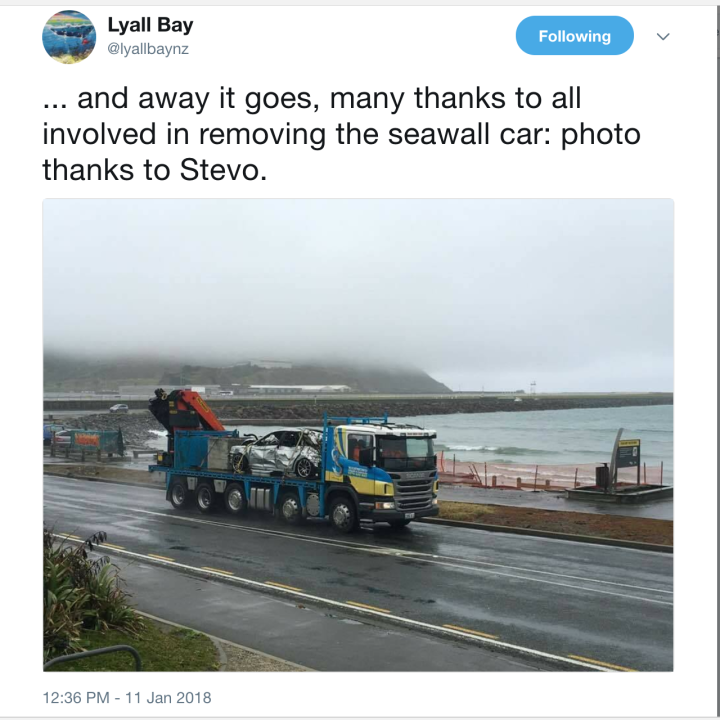 Both the Harbourmaster and the Police, which seemed to give mistaken (?) statements that nobody was in the vehicle at the time it was washed off, did not seem to be interested in recovering the vehicle, as it was “the owner’s responsibility”. We have to question this blasé attitude to quite serious pollution of one of our most used city beaches – the car was clearly a write-off so why would the owners go to considerable trouble and expense to get it recovered if no one forced them to? Debris was floating on the surface and washed up on Moa Point beach, around the corner. Surely, the waves could also easily carry it onto the surf break or Lyall Bay beach where it could be a hazard to the public. Would the Regional Council have finally sent someone if the community and Councillor Calvi-Freeman hadn’t been making inquiries?

Secondly, and more concerning seeing that people have died by being swept off that breakwater in the past, is the very disingenuous attitude by the airport erroneously claiming that the barrier was only recently destroyed (see photos from 2015, above) and that it was none of their problem “as the land was owned by someone else”. Reading their “urban design assessment” which forms part of their (halted) Environment Court resource application – halted, by the way because the airport thought it could get away with extending the runway without proper safety areas, which the Supreme Court just agreed with the Pilots’ Association was not sufficient – it becomes clear that the land is indeed owned by the Wellington City Council (WCC). What also becomes clear, however, is that the airport has built the breakwater and sea wall and been “maintaining” it by dumping rocks and akmons off it – without seemingly having a clear permit or resource consent to do so.

The Surfbreak Protection Society has pointed out in the past that this practice by the airport has severely degraded the quality of the “Corner” surf break in Lyall Bay. Their detailed research uncovered that, even though WCC is holding resource consents for work on the sea wall, it was not them but the airport who had been conducting the dumping of rocks in 2015 – without the Council’s clear knowledge. The surf community is in talks with the Council and Airport to have a vertical sea wall reinstated along the length of Moa Point Rd alongside the airport as it was back in the 50’s – 70’s, when the Corner was at its optimum performance. After GRWC directed SPS to have meeting with WIAL last September, Greg Thomas from WIAL noted that the continual dumping of rocks “may not be as cost-effective” as constructing a permanent vertical wall.

In addition, as part of the ‘mitigation’ for destroying one of our most beloved South Coast tāonga, a 3m cycle way and “promenade” is promised to be built by the airport, at the breakwater. 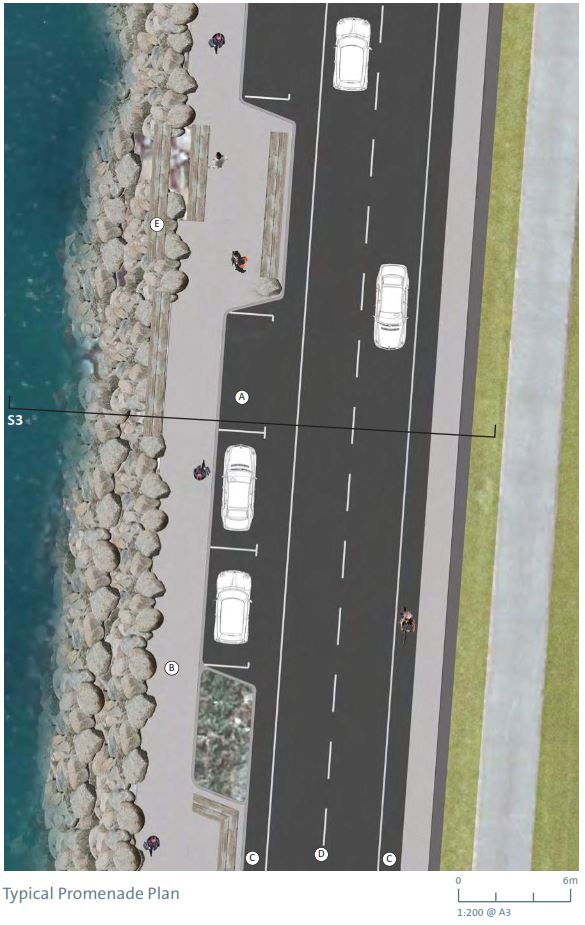 It is quite clear from looking at these imagined drawings, that none of the so-called “experts” the airport has paid with ratepayer dollars have bothered really visiting the area – especially in a Southerly. If they had, they’d have drawn the pedestrians and dogs being washed into the broiling sea and drenched by towering waves! With the benches and access to sea level from the rocks, there is absolutely no way this area can be cordoned off to the public in dangerous conditions. The Council has also recently announced that it was thinking of moving the Lyall Bay car park, near the surf break, as coastal inundation just made it too vulnerable to being repeatedly washed out.

Why does the Council let the airport play hazard with public safety and amenity to this extent, even paying them to do so (for example, by providing millions for the – now useless(?) – expert reports)? Why does it then not hold the airport responsible for any issues related to public health and safety and the clear reduction in amenity values, like the surf break? Who is actually in charge here and does someone else have to die before the authorities will finally do something about this mess?

19 November 2017 – Wellington International Airport is continuing its cynical campaign to shoehorn Wellington ratepayers into paying for a runway extension, despite having no airline, no business case and no eye to safety concerns raised by pilots, according to concerned ratepayers, community leaders and recreational groups.

Guardians of the Bays, which represents more than 600 recreational, community and ratepayer members, says Wellington Airport’s announcement that it has signed a Memorandum of Understanding with a Chinese company to construct the new extension shows it has little respect for the community or the ratepayers.

Guardians of the Bays’ Co-Chair Richard Randerson says WIAL is trying to reinvigorate its extension plans on the back of the Government’s $1 billion regional development fund.

“The questions that residents and ratepayers had prior to the General Election have still not been addressed. There is already evidence that the proposal is likely to cost much more than the $350m originally suggested, up to $500m according to one expert.

“The Environment Court process is not completed, there are still questions about the safety of the airport currently being reviewed by the Supreme Court and there is still no detailed business case.”

Co-Chair Dr. Sea Rotmann says the burden to ratepayers and taxpayers of the proposed extension continues to be unacceptable – particularly as the suggested benefits to Wellington City are anything but guaranteed.

“No airline has committed to flying into an extended airport and the one airline currently flying (via Canberra) is getting very low loadings, according to an independent monitor of routes around the world. Singapore Airlines reduced the number of flights in response to low demand.

“The Airport has specified the limit for its own investment in the extension at $100m now. Anything above this must come from Wellington ratepayers and New Zealand taxpayers. There is still no business case that has gone through the Treasury’s Better Business Case process to prove if it is even eligible for public funding,” she says.

In a meeting with Guardians representatives earlier this year, Mayor Justin Lester said the extension was not likely to happen anytime soon and that Wellington City Council would not commit to providing more than $90m.

“Mayor Justin Lester said that Wellington ratepayers will not be contributing any more money to the Airport’s application process. The Mayor has finally declared enough is enough – Wellington City will not hemorrhage money to support a poorly planned and poorly researched project when many, more critical initiatives need prioritising. So why are he, and WCC CEO Kevin Lavery signing an MoU with a Chinese construction company and airline as if this proposal is a done deal?

“The Council already gave the Airport $3m of ratepayers’ precious money to fund the creation of its reports, which are consistently being shown to be little more than ‘spin’ to support the Airport’s slant on the proposal.

“Infratil, majority owners of Wellington Airport, are offering to put in less than 20 percent. The rest will have to come from ratepayers and taxpayers. That means further increases in rates.

“How can Wellington sell its self as a world-class tourist destination with a strong environmental record when we need to invest so heavily in things that make it just that, such as our infrastructure, earthquake resilience and our performing arts’ venues?”, Dr Rotmann says.

“Other priorities for Council expenditure include affordable housing, reducing traffic congestion – like on the access road to the airport – and improved social services,” says Richard Randerson.

“Ratepayers have consistently rated such items as of greater priority than a runway extension. It is very disappointing that the Mayor and Chief Council Executive should be signing an MOU with a Chinese construction corporation before essential criteria have been met. It makes a mockery of democracy and slants the playing field in favour of an extension before the matter has even been considered by the Environment Court,” he says.