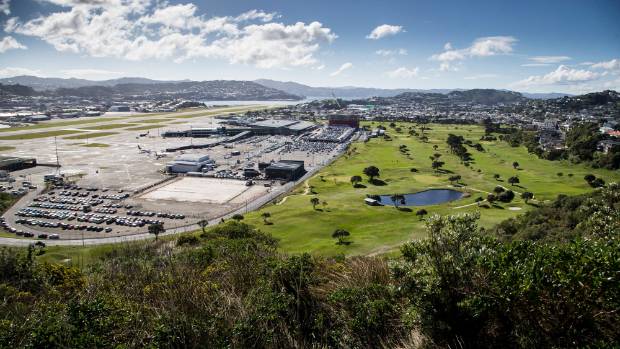 Wellington Airport’s increasing demands for more space means it is looking at taking a big chunk of the Miramar Golf Club’s land. Miramar Golf Club could see half its land gone in as little as three years due to the expansion of  Wellington Airport. Wellington International Airport Ltd revealed provisional expansion plans at the golf club on Monday night, prompting some club members to call the extension a fait accompli. A need for more aeroplane parking space was the biggest driver, but new civil aviation rules requiring additional luggage screening techniques also contributed to demands for more space. 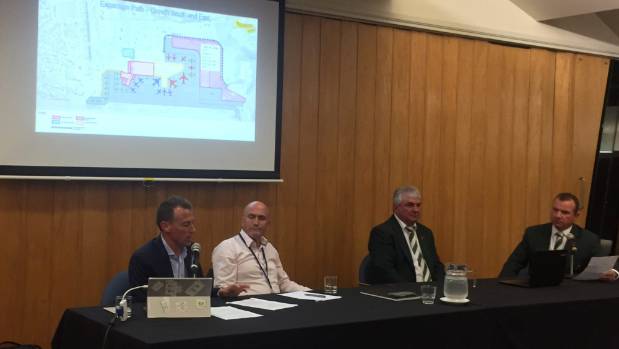 The airport has the power to buy land as it sees fit, under the Public Works Act, but this could be appealed in court. On the plan the purple area, which encroaches on golf course land, will be devoted to aircraft parking. The blue area is the new multi-storey car park. The yellow area is the existing terminal, and the red area will be needed for aviation support. Club members asked why the airport couldn’t simply spread out arrivals and departures to ease the demand. Clarke responded that many flights were coming from overseas, and the airport couldn’t dictate arrival times. “If you want to stay competitive with other airports and other places and other cities you have to provide for the growth in travel when people want to travel.” 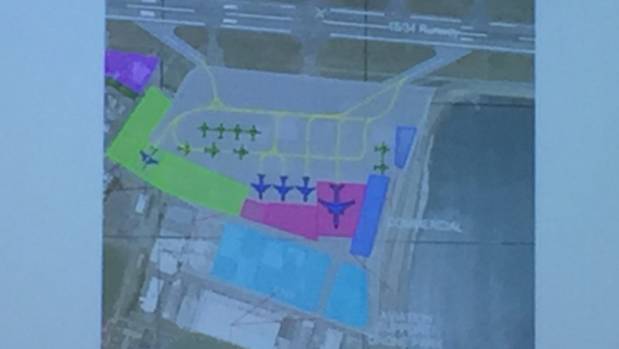 A separate slide shows the airport extension expected to come into effect on the Western Apron.

On the plan a large purple area, which encroached on golf course land, would be devoted to aircraft parking, as well as catering, cargo, aviation security, apron access and fuel facilities. A proposed new road, marked with a black dotted line, ran through the existing course. Clarke said the airport had investigated possible locations where the golf club could be moved to, but hadn’t found any suitable sites. If a good location was found, the company would consider helping with the relocation. Members of the club accused  the company of purposefully building itself into a corner, making expansion on to the course the only option. 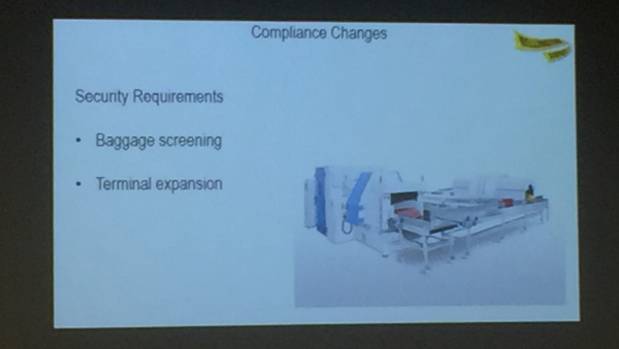 New CT scanners for checked luggage will also likely prompt the expansion of the airport terminal to the south.

“You create that congestion and then you tell us we have to stop playing golf to accommodate it,” one man said.

Airport infrastructure general manager John Howarth said when Wellington Airport’s 110-hectare site was compared with Auckland’s 1600ha footprint, it was clear the operation was running on “a postage stamp”. He said two major things had changed since the 2030 Master Plan was written in 2009. 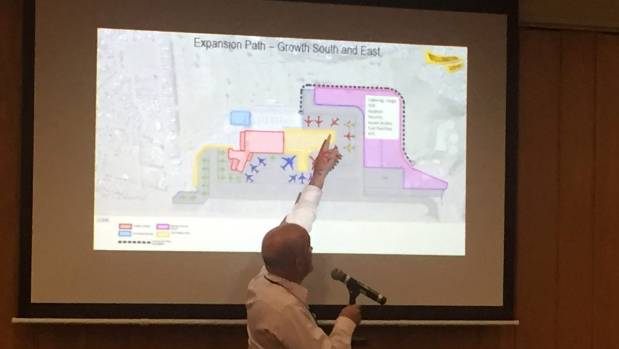 Airport infrastructure general manager John Howarth points out the area in purple, which would likely be taken from the Miramar golf course.

The first was  that most airlines were opting for larger planes which legally required larger parking spaces.

“If you go back to 2009 the average number of seats on planes going to Auckland and across the Tasman was about 130, and if you look at the aircraft that we have up there at the moment that’s more than 170,” he said. Competition had already increased, with ever smaller players such as Sounds Air jumping from three aircraft in 2009 to 10 now. New security requirements would also meant the extension of some airport buildings.

“The requirement for CT-scanners to meet the European Civil Aviation Standard is significantly greater in terms of area and size. We cannot fit this within our existing footprint … We’ve investigated the area needed, which is about 3000 square metres, and determined the only place we can supply that is to the south of the terminal, and we need to deliver that by 2022.” There may also be new requirements for the scanning of carry-on luggage. An airport extension would require changes to the District Plan.

Some members of the audience asked how the Wellington City Council, which owns 34 per cent of the airport, could be responsible for making changes to the District Plan. Clarke said if there were a conflict of interest an independent commissioner would be brought in to consider the council’s decision. Golf club member Kevin Banaghan said it was up to the club to consider all the options – including the price offered for the land – and decide on the best option for the future.