We now have 5 candidates contesting the Mayoral election this year, and four of them are gung-ho supporters of the corporate hand-out to fossil fuel giant, Infratil.

Why oh why does Infratil, which owns airports, energy companies, transport groups, property and hundreds of petrol stations with more than $2.5 billion in assets, still need handouts from the Wellington City Council? Why oh why are Justin Lester and Co promoting discredited numbers around this extension ad nauseum, yet refuse to insist on a proper business case by the airport? Why oh why did the Council hide the subsidies to attract Singapore Airlines to fly to Wellington (via Canberra), with Justin Lester trying to blame his leak on Helene Ritchie? Why oh why are they pushing for Wellington ratepayers to pay half of the cost of the runway extension, even though they will – at utmost, and only with unreal fantasy projections – only get a third of the economic gains? Why or why are they paying for half when they only own a third of the shares yet get just over 10% of the dividends? Why oh why are they calling critics of the airport extension to be “Anti-Wellington” and “Anti-Competition”? Why oh why is a former Green Party member who become Mayor suddenly turning her credibility into a pretzel by claiming that more long-haul flights will reduce emissions? Why oh why is the Council promoting a ‘low carbon plan’ yet fiddling with the actual aviation emission statistics which will make up more than 25% of Wellington’s emissions?

We think we know why: Because Infratil, the 66% owner of the Wellington Airport (WIAL), seems to have a very strong hold over many of these candidates. Here is Tim Brown, Chair of the WIAL board, waxing lyrically about Justin Lester in his campaign video. We all know that Celia is sitting on the WIAL Board of Directors and thus hugely conflicted when she insists on keeping up her promotion of the runway extension in public. And Jo Coughlan is cozying up to the Chinese to attract foreign investment for Infratil’s – and her Council’s – pet projects.

That leaves only Keith Johnson, one of the Guardians, who actually opposes ratepayers giving such corporate handouts to a multi-billion company and rejects pork barrel politics. He cheekily shows Justin Lester proudly wearing some of his corporate badges. It may not be a bad idea asking all of our Mayoral candidates to wear, literally, on their sleeves who their corporate supporters are and why they always seem to end up with ratepayer handouts to the tunes of millions of dollars. 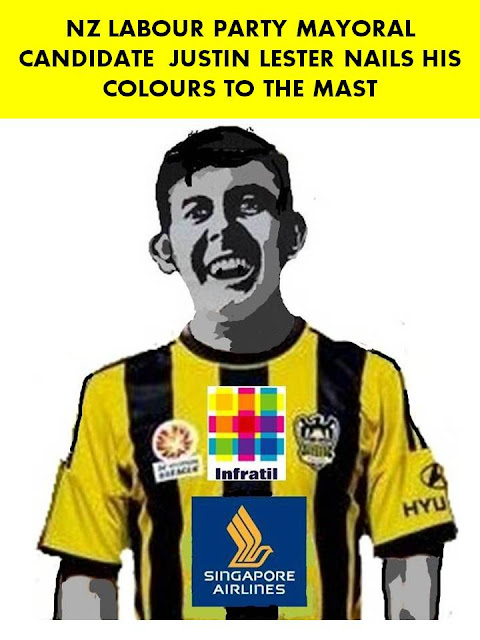 5 thoughts on “WHY OH WHY ARE SO MANY MAYORAL CANDIDATES FOR THE RUNWAY EXTENSION?”